The birth and growth of Procotex

Acquisition of the assets and short fibres business of ELG carbon recycling UK. This acquisition completes the next strategic step of serving the compounding and other industries with Carbon fibres in bigger capacities and in bigger feedstocks.

Acquisition of the assets and business of A. Herzog Lyss Switzerland. This acquisition completes the next strategic step of serving the friction and gasket market with milled para-aramid fibres.

Investment in 1 MW photovoltaic electricity power station on the site of Dottignies to increase the sustainable philosophy of the group.

The recycling company Belturec is established in Turkey because of the growing globalization of textile waste.

The French Apply Carbon is acquired because of the growing market of carbon fibres in the composite industry. This company specializes in the milling and precision cutting of Carbon fibres, Aramid fibres and other technical fibres such as Basalt, Glass, Flax, … This acquisition fits perfectly into the strategy of the continuous diversification of textile recycling.

2007 - Acquisition of the rest of the Linolitas shares

The activities of Linolitas and the recycling activities are expanded further. The remaining 50% Linolitas shares are acquired by Dolintex.

Investment is made in a third shredding line to be able to focus on the recycling of raw materials with a lower value. The company NV J.&E. Douchy merges with Procotex Corporation S.A.

: It is decided to transfer the full carding and cotton department from Wevelgem (Belgium) to the Lithuanian Linolitas. The carding and cotonizing activities have since been discontinued in Belgium. This also applies for the felt department. The flax fibre trade is further expanded in China.

In January, the Open-End department is closed due to the globalization of the textile sector. In September, Dolintex acquired 50% of the shares in Linolitas.

As a result of the constant globalisation of the international business world and the growing competitiveness, an exclusive partnership for hackling was concluded in Kaunas (Lithuania) Our competitiveness is guaranteed, without loss of quality. Thanks to this partnership, it will be possible to discover the new growing markets in East-Europe. 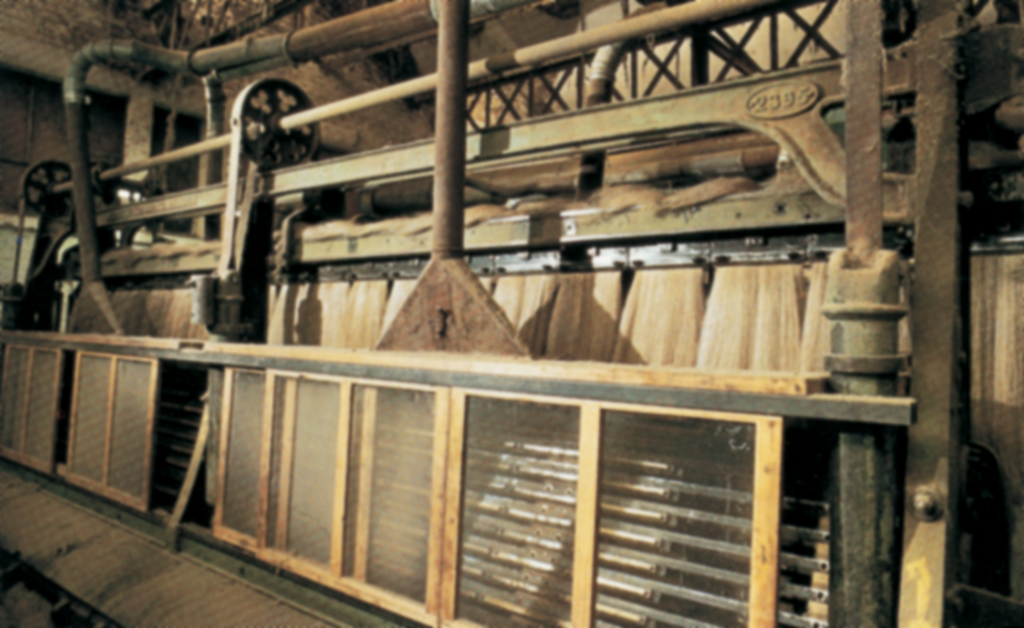 Two new state-of-the art pulling lines in the recycling department are installed to serve the steadily growing demand for our products. Two more hackling machines for flax preparation are put in production.

Large-scale investment in the recycling unit experience unprecedented and rapid growth. Plenty of investment in a fully automated installation, to increase the production. All bales have the same dimensions, bound with polyester straps and automatically labelled. Acquisition of the company Effilaar (Tielt) to further improve the Procotex product range and to perpetuate the diversification of the recycling unit. The synergy between the two companies offers many new options.

The various independent companies of the group are restructured. Procotex and Belgalin merge into a single company: Procotex. The production and sale are better attuned to each other and the communication is also optimized. Thus Procotex can react to the customer’s demands better and even faster. 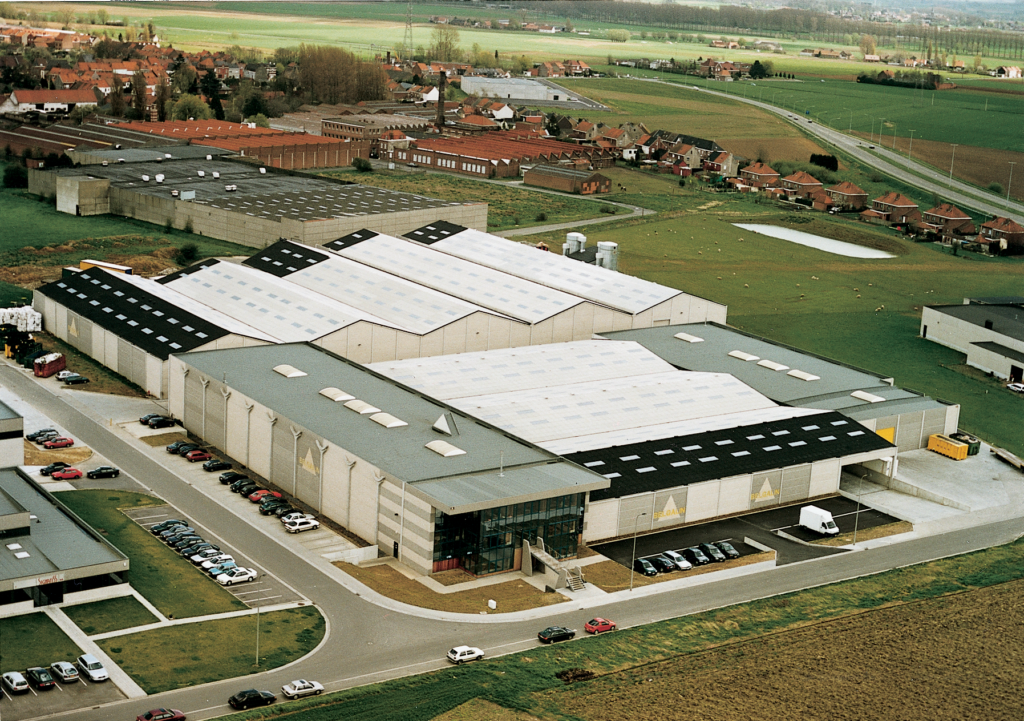 E-lin, a yarn characterized by its low cost and its extraordinary properties, is marketed successfully. This unique product is manufactured based on ‘open-end’ spinning machines modified specially for flax fibres. But the flax fibres are also prepared especially in-house in the own carding department. 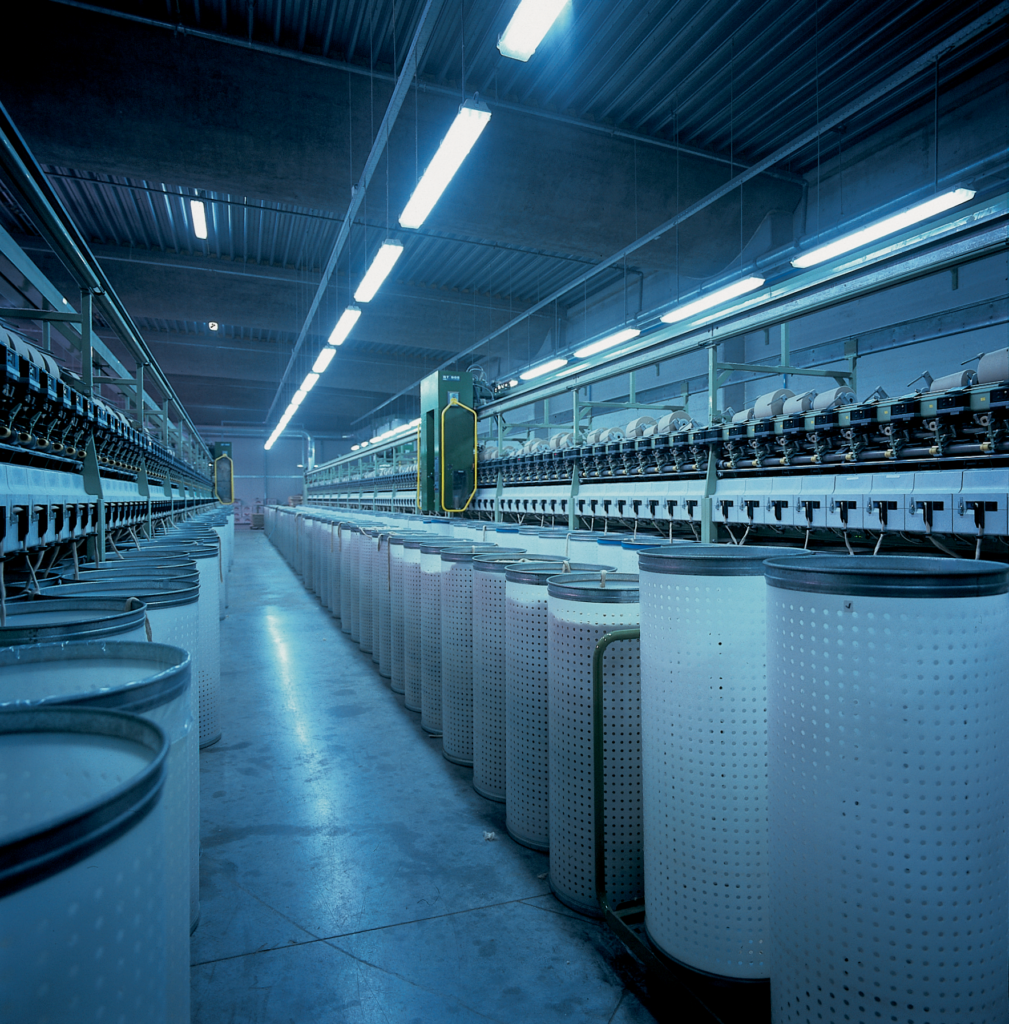 A first felt production line was established to facilitate a new ecological trend (the use of natural fibres to manufacture vehicle interiors). The produced felt was manufactured based on flax (or jute) mixed with polypropylene (or another fibre) in an air lay system of 4.4 m wide. The felt can be reinforced, made fire retardant or undergo a fungicidal treatment. Cutting to the required size is also possible. The felt can be used for both thermoform and duroplast systems. 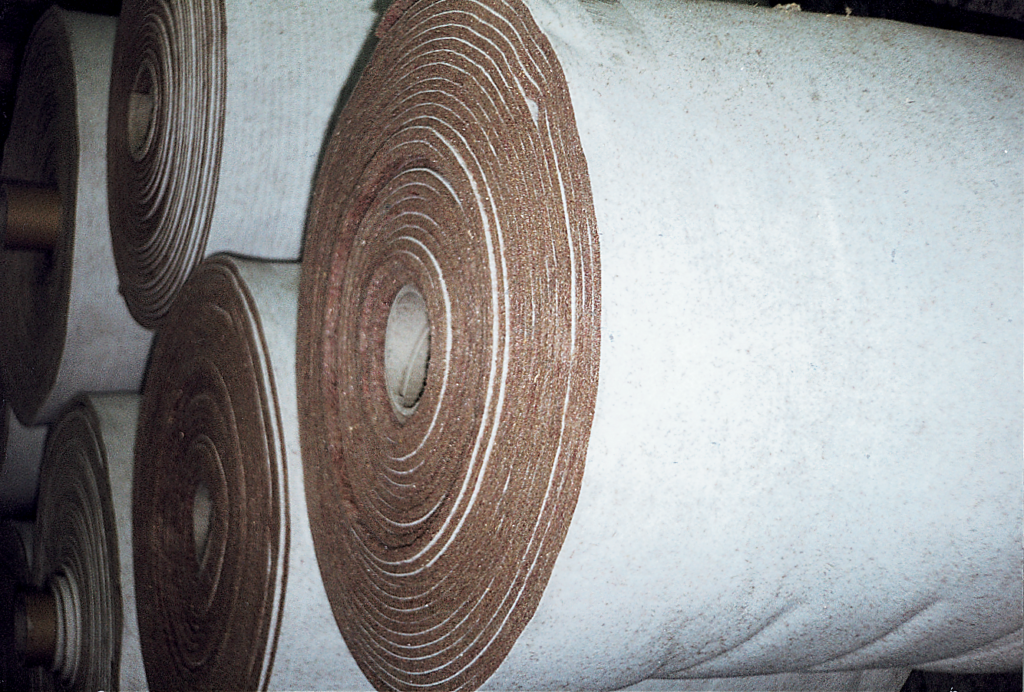 A new company, Belgalin, is established in Dottignies. Considering the tight buying market of pulled products, Procotex decided to take care of its own pulling (unravelled to fibre).
The hackling department was also expanded on with a continuous hackling machine of the make Linimpianti and 2 New Mackie-hackling machines. Last but not least. Belgalin was equipped with an ultramodern laboratory intended for all production units. 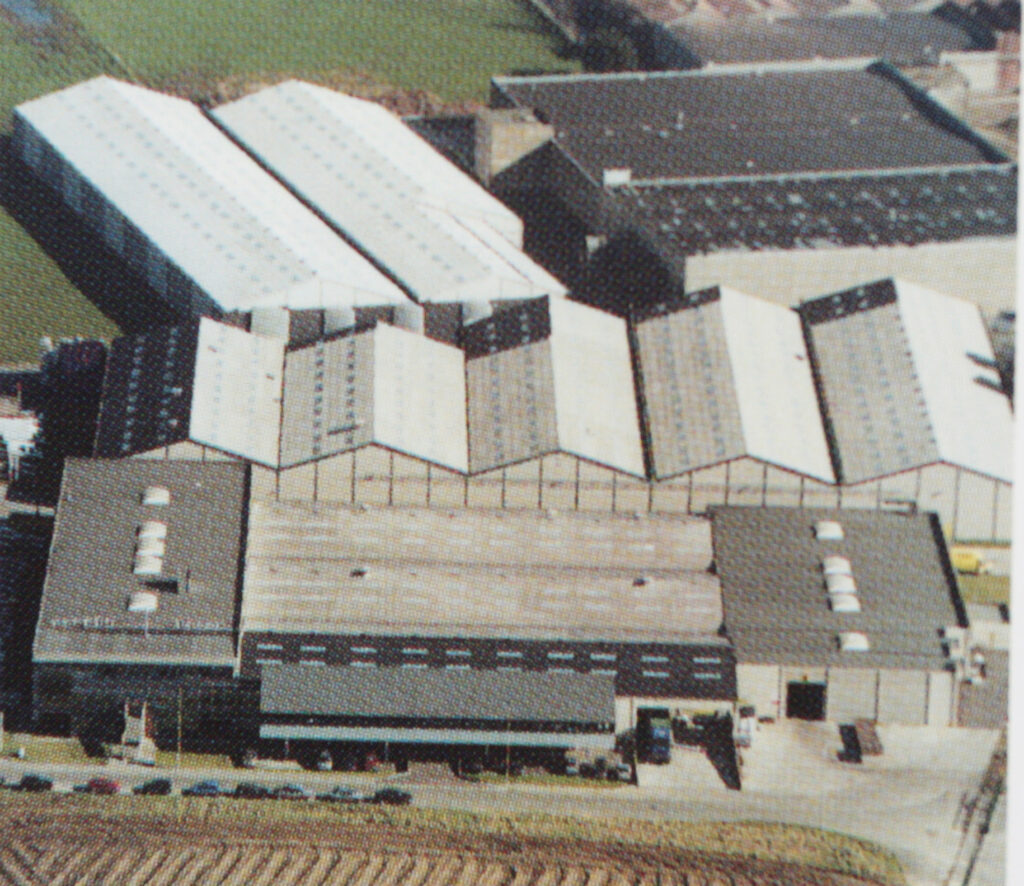 The second generation takes Procotex over, thus securing the future of the company. In the meanwhile, the trade in recycled polypropylene and jute is expanded further. 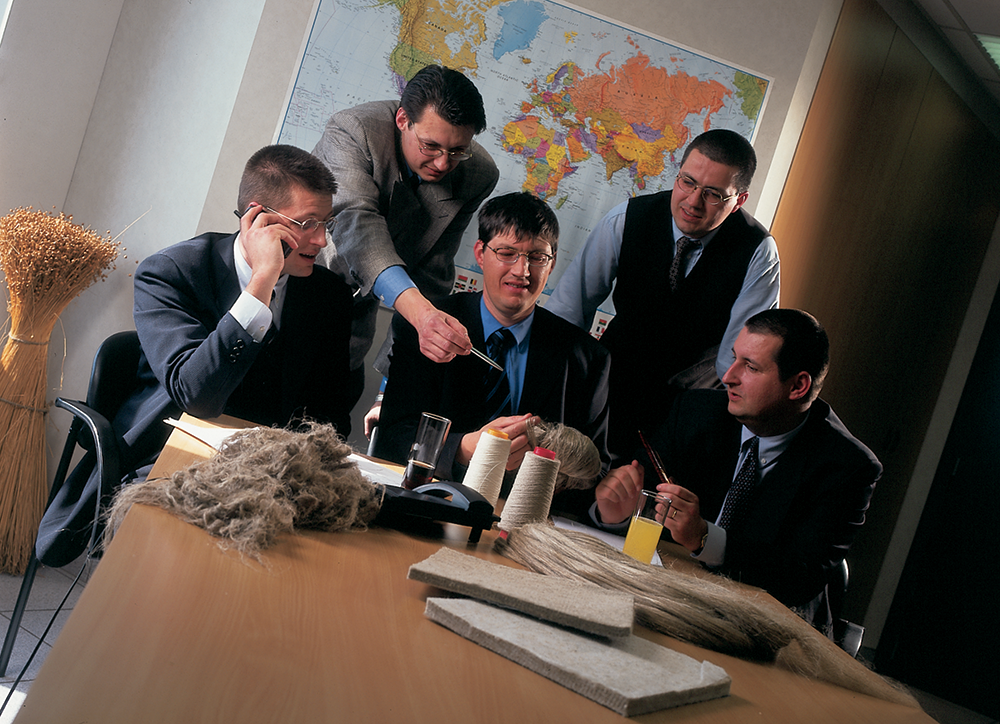 Establishment of Procotex Holland, a company specializing in flax seed. In close cooperation with the Ropta culture centre, new flax varieties are developed and cultivated. For many years, the Natasja variety remained market leader in the field of flax seed. The excellent yield of its fibre and straw is obviously a well-known fact.

Natasja found a promising successor: Elise. In 1990, part of Ropta is incorporated with 2 other partners in Procotex Breeding. 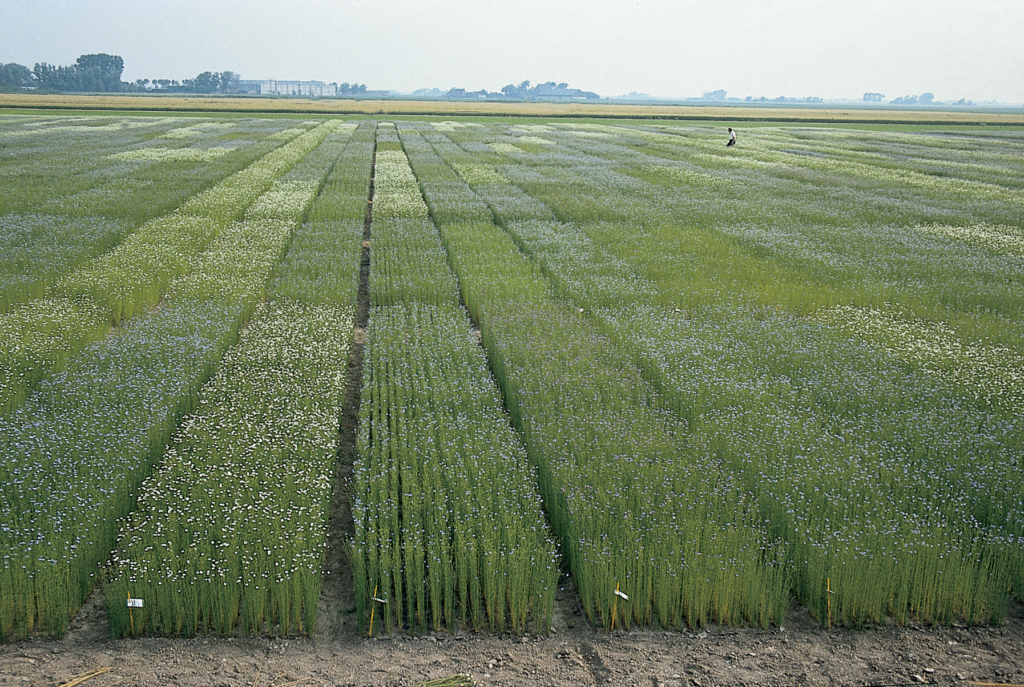 A company specializing in the buying and selling of flax and derived products was established, called Procotex (PROducer to COnsumer of TEXtiles Products). Procotex became independent of the Group and was well known for its exceptional service. The sales market for its products was the paper, cord and textile industry. 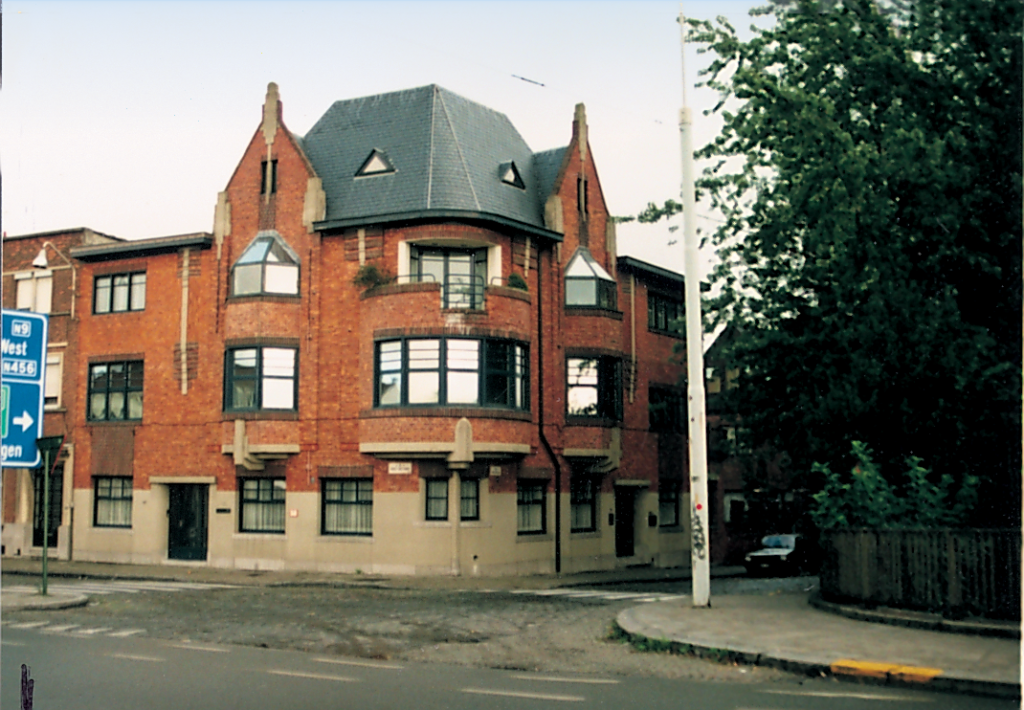 The two Douchy brothers, Jacques and Eric, decided to establish their company, the NV J & E Douchy. At first, they were only involved in the flax trade, but quite soon they expanded their activities to include the preparation of flax fibres. In 1965, they purchased their first flax hackling machines. The first independent hackling company saw the light! In 1969, the two brothers bought their first flax cards and their first combing machines. During the course of the years, the carding and hackling activities became so important they had to be separated in individual departments. Because of the quantity available and the exceptional quality in particular, the .NV J. & E. Douchy became world famous. 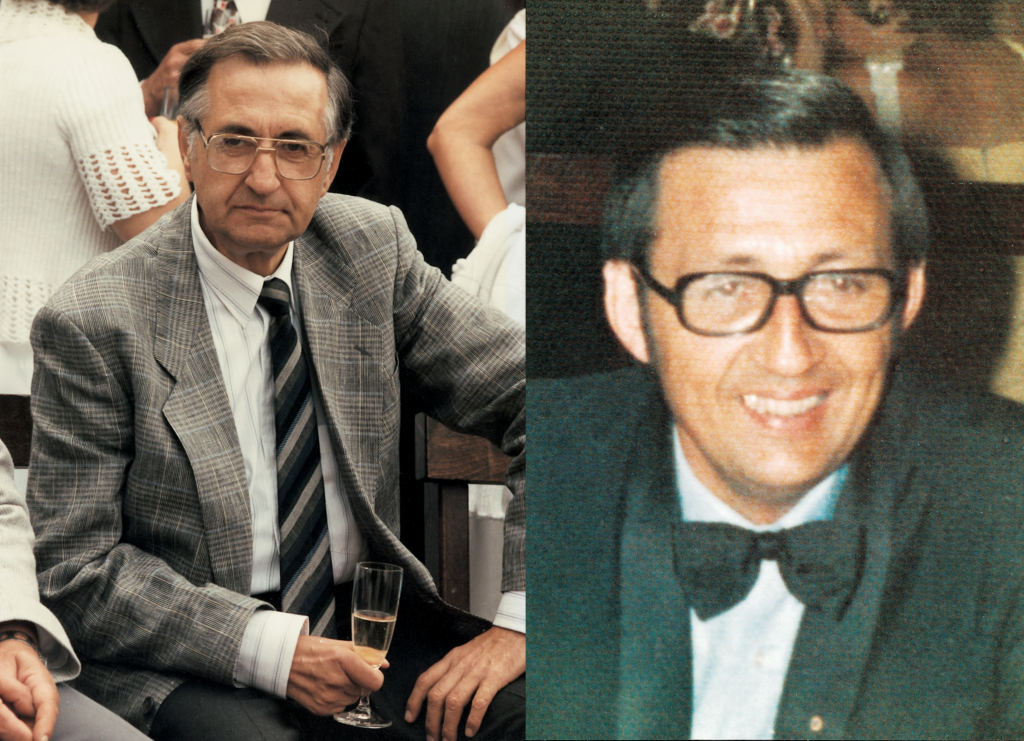 The first generation Douchy has always lived in Wevelgem, the beating heart of the flax industry. And more specifically, along the Leie (The Golden River). In their time, almost all of Flanders was either directly or indirectly involved in the flax industry. Our ancestors were real experts in the trade of flax fibres (“botekopers”). 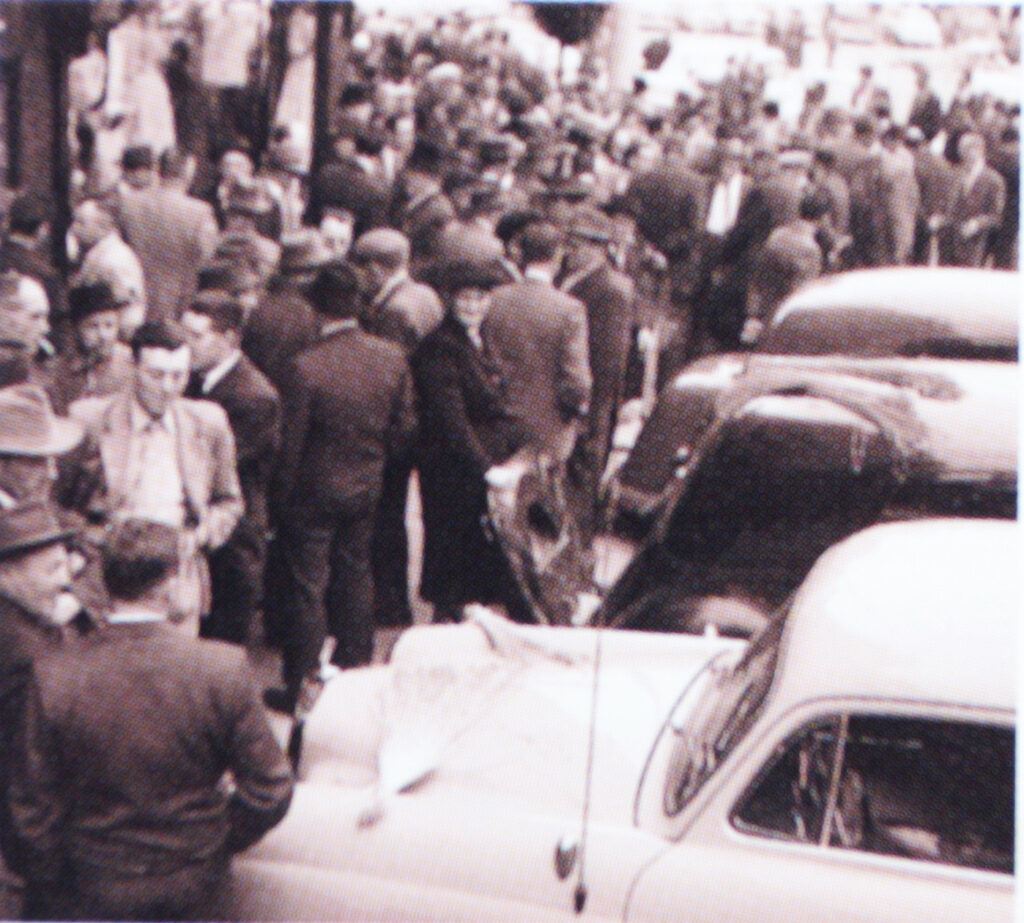 This website uses cookies to provide a better customer experience and facilitate the use of this site. By continuing to browse, you are agreeing to the use of these cookies, click here for more information.